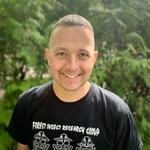 June 11, 2021
Genome sequencing methods and assembly tools have improved dramatically since the 2013 publication of draft genome assemblies for the mountain pine beetle, Dendroctonus ponderosae Hopkins (Coleoptera: Curculionidae). We conducted proximity ligation library sequencing and scaffolding to improve contiguity, and then used linkage mapping and recent bioinformatic tools for correction and further improvement. The new assemblies have dramatically improved contiguity and gaps compared to the originals: N50 values increased 26- to 36-fold, and the number of gaps were reduced by half. Ninety percent of the content of the assemblies is now contained in 12 and 11 scaffolds for the female and male assemblies, respectively. Based on linkage mapping information, the 12 largest scaffolds in both assemblies represent all 11 autosomal chromosomes and the neo-X chromosome. These assemblies now have nearly chromosome-sized scaffolds and will be instrumental for studying genomic architecture, chromosome evolution, population genomics, functional genomics, and adaptation in this and other pest insects. We also identified regions in two chromosomes, including the ancestral-X portion of the neo-X chromosome, with elevated differentiation between northern and southern Canadian populations.